A. Lange & Söhne is unveiling today the second generation of the Zeitwerk, its digital watch with a mechanical heart. 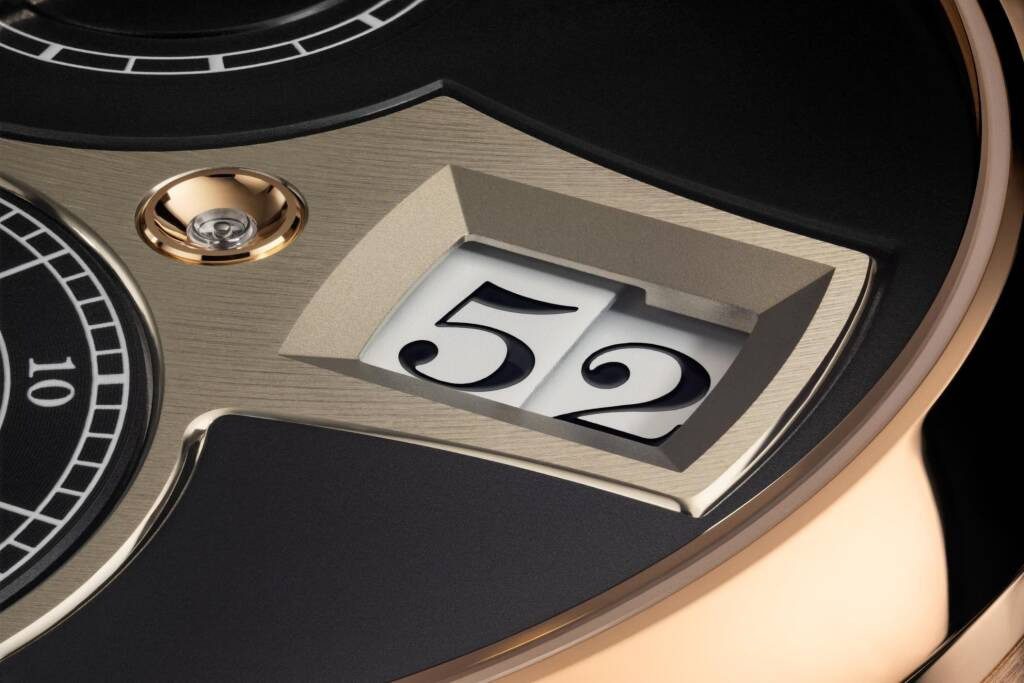 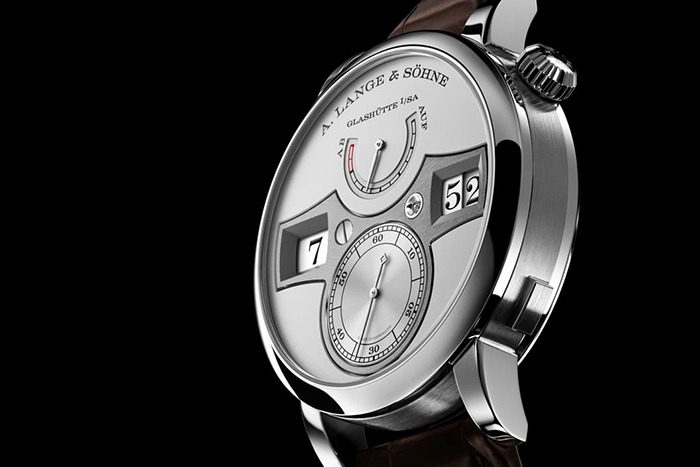 The Zeitwerk, along with the Lange 1, is the most iconic timepiece of the German brand and was first introduced in 2009, creating an instant buzz in the world of watchmaking.
Its avant-garde time display, which features huge jumping numbers for the hours and minutes and is still unrivaled today, was inspired by a famous five-minute clock at Dresden’s Semper Opera House.
The Five-Minute Clock, located just above the stage, was built by court clockmaker Johann Christian Friedrich Gutkaes at the request of King Frederick Augustus II of Saxony to allow everyone in the opera house to read the time clearly, even from the backmost seats, without disturbing the musical performance by activating minute repetitions. 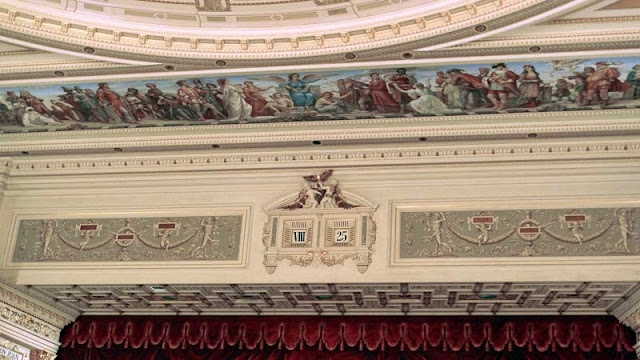 Contrary to all large-format clocks with hands, he opted for a revolutionary solution: a clock that displayed the time digitally in five-minute steps. The clock was completed in 1841 in co-operation with his co-worker Ferdinand Adolph Lange. The idea behind it was transposed to the Zeitwerk, of course making it now switching once per full minute. 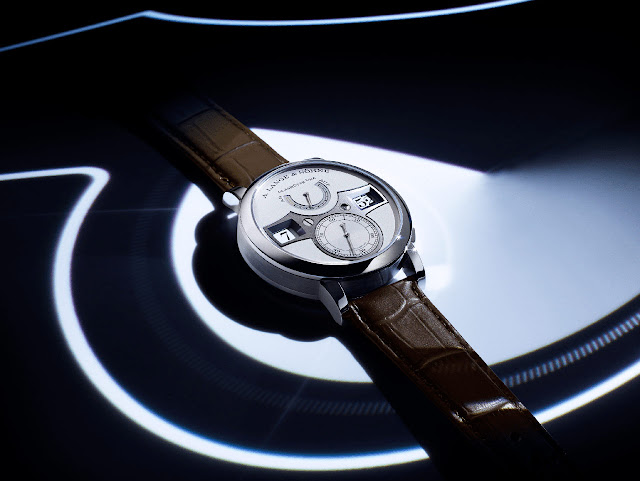 The patented mechanism of the Zeitwerk displays hours and minutes from left to right using large-format numerals that are 2.9 millimetres high and 2.3 millimetres wide. The arrangement on the curved time bridge and the size of the displays ensure perfect legibility.
The three jumping numerals discs – one displays the hours, the other two display the units and the tens digits of the minutes – switch within fractions of a second. At the top of the hour, all three numerals discs are simultaneously advanced by one increment. 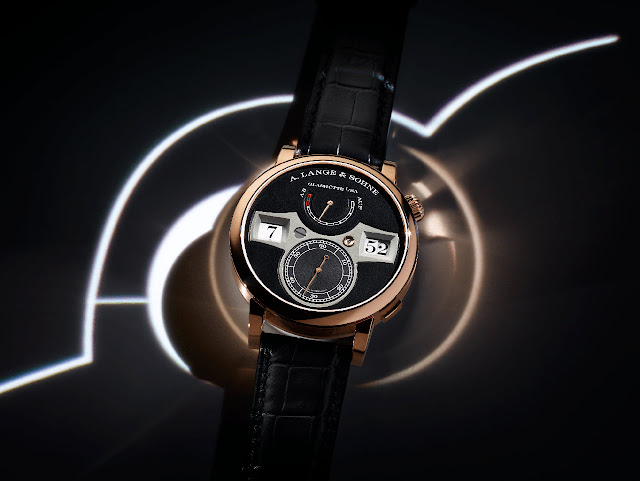 Fitting the mechanism in the limited dimensions of a wristwatch and at the same time providing enough energy to produce the synchronised switching steps represented the two biggest challenges.
To understand the level of difficulty, just consider that the hour ring with a diameter of 30.0 millimetres extends to the outer circumference of the movement and that the two discs used for the tens-minute and units-minute have diameters of 19.0 and 12.7 millimetres, respectively.
Both discs are separated by a height difference of merely 0.2 millimetres, which calls for highly precise settings by the watchmaker. 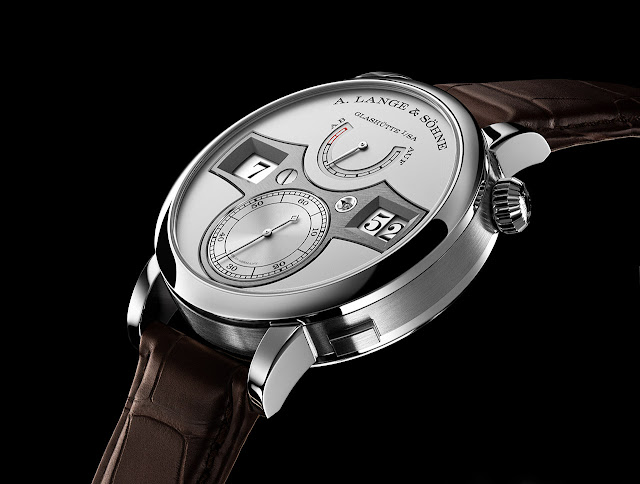 “To switch the discs of the jumping numerals mechanism to forward on time every minute, the movement requires much more energy than a classic time display,” explains Anthony de Haas, Director of Product Development. “Not only are the numerals discs very heavy by watchmaking standards, but they also have to be quickly accelerated and braked again. This calls for considerably higher forces than the uniform rotation of a pair of hands of much less weight. The greatest amount of energy is needed at the top of the hour when the movement advances all three discs at the same time.”
Also, the incremental step must be executed precisely after 60 seconds, an operation that is handled by the patented constant-force escapement which also contributes to ensure that the movement is powered by a uniform amount of force for enhanced rate stability.
While these challenges were already intelligently mastered by the first-generation Zeitwerk, the new generation goes a step further with the refined calibre L043.6. 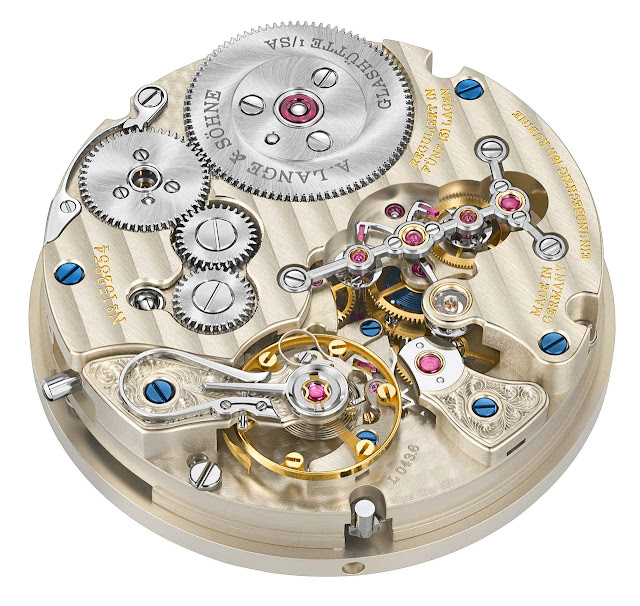 Thanks to a patented barrel design with two mainsprings, it was possible to double the power reserve from 36 to 72 hours. 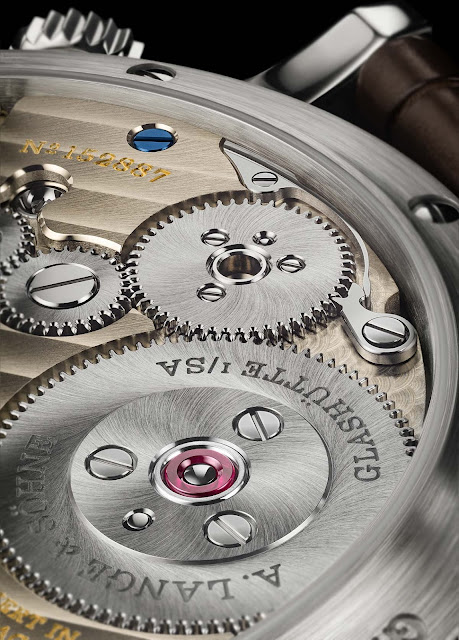 Another improvement versus the predecessor model is the simplified setting of the hour. A pusher at 4 o’clock can now separately advance the display, which is particularly useful when the time zone changes during a trip. The pusher is an inverted type: nothing happens when it is pressed but the display switches forward when the pusher is released. 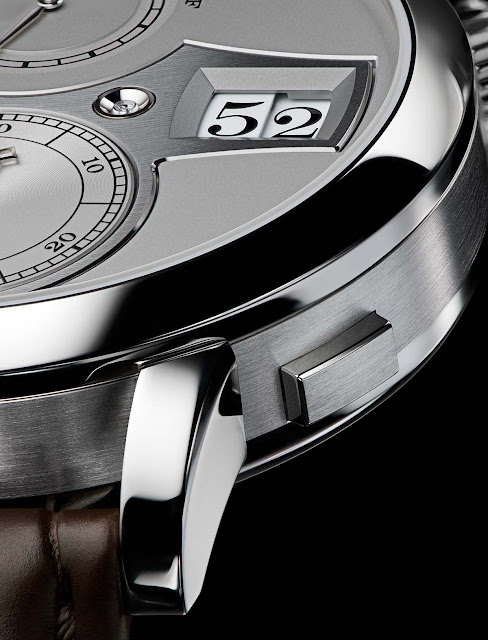 To enable the correction independently of the switching cycles of the time indication, a patented vertical clutch uncouples the hour ring from the jumping numerals mechanism each time the pusher is pressed. The setting of the minute indication in both directions is still performed with the crown at 2 o’clock. 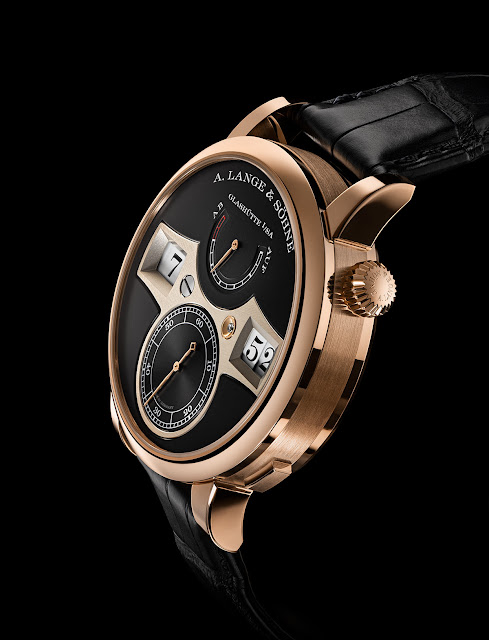 Equipped with a constant-force escapement as a beat controller, the hand-wound L043.6 calibre oscillates with a frequency of 18,000 semi-oscillations per hour (2.5 Hertz).
Through the sapphire-crystal caseback, it is possible to admire the impeccable finishes including the hand-engraved balance and escape-wheel cocks, the solarised winding wheels, the 59 jewels, and the straight-grained remontoir bridge that accommodates two recessed, screwed gold chatons. 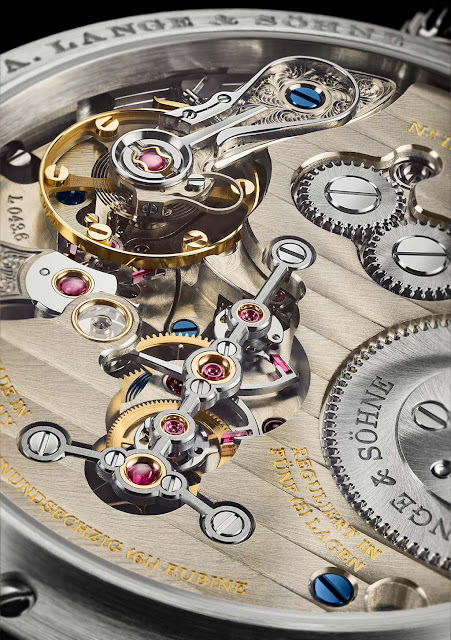 The dial remains strongly characterised by the prominent time bridge made of German silver. The material, traditionally used by A. Lange & Söhne for frame parts such as bridges and cocks, makes it clear that it is an integral component of the movement. In the new Zeitwerk, it was subtly reworked to enlarge the subsidiary seconds dial at 6 o’clock. 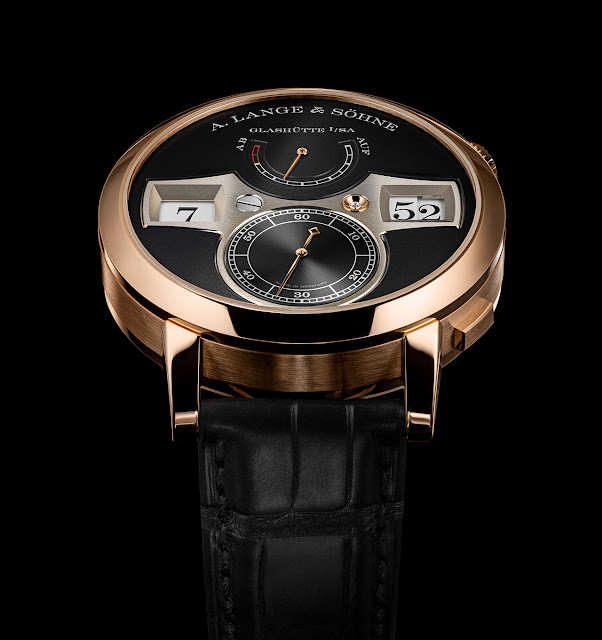 In the scale of the power-reserve indicator on the opposite side, harmoniously positioned above the round of the time bridge, the last twelve hours are now marked in red to clearly indicate that the tension of the mainsprings is gradually waning. 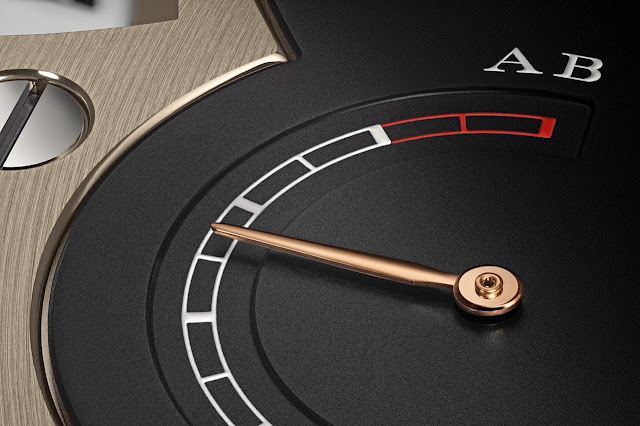 The sapphire bearing jewel for the ones- and tens-minute ring to the left of the two indications is a refined detail that also builds a bridge to the movement. In most cases, rubies are used for bearing jewels, but in this case, Lange’s watchmakers chose this colourless, transparent precious stone for aesthetic reasons. 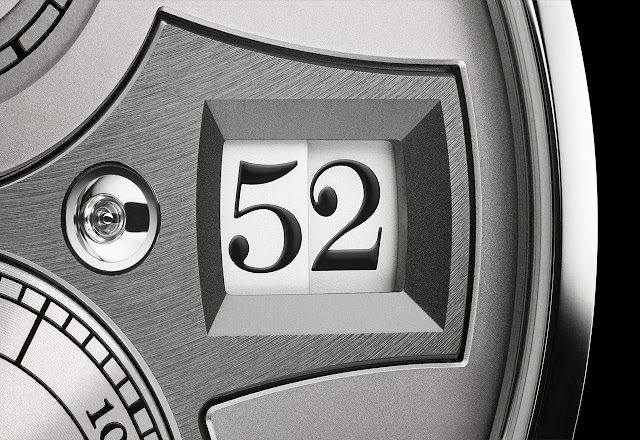 At launch, the new Zeitwerk is presented in two variations, one in pink gold with a black dial and a time bridge made of untreated German silver, the other  in platinum with a rhodié dial made of solid silver and a black rhodiumed time bridge. 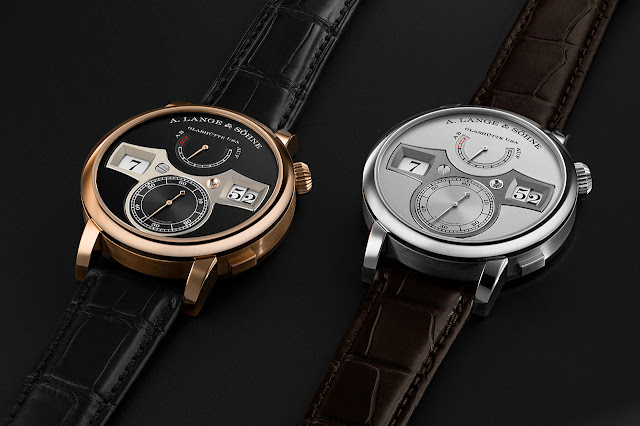 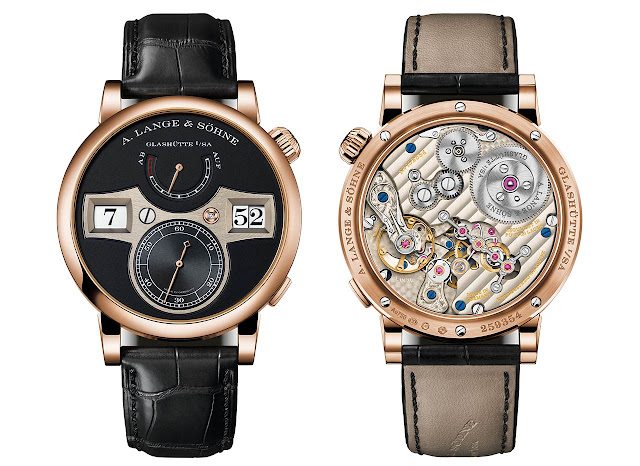 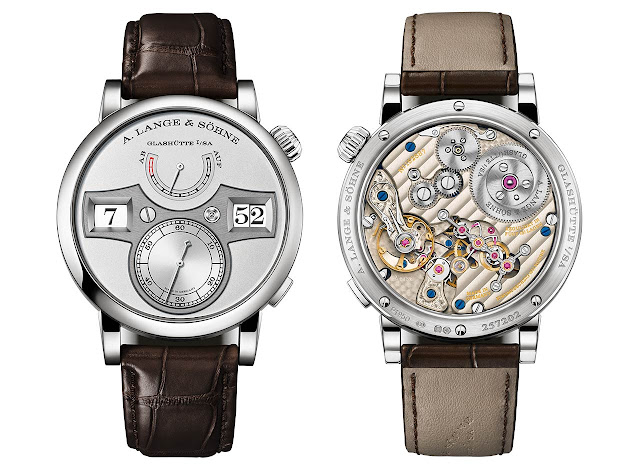 Alternating satin-brushed and polished surfaces, the case has a diameter of 41.9 mm and a height of 12.2 mm.
Matched to a black or a dark brown alligator leather strap, the new Zeitwerk by A. Lange & Söhne, either in pink gold (ref. 142.031) or in platinum (ref. 142.025), is available only through the boutiques of the brand. Prices on request. alange-soehne.com
Suggested reading:
– Our visit to the A. Lange & Söhne manufactory
– Interview: Anthony de Haas, Director of Product Development at A. Lange & Söhne 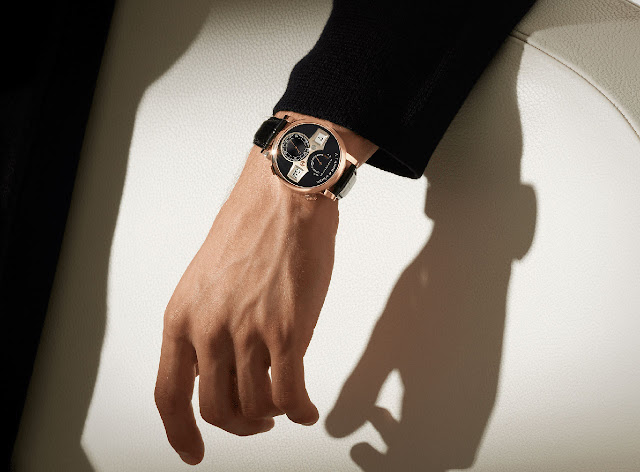 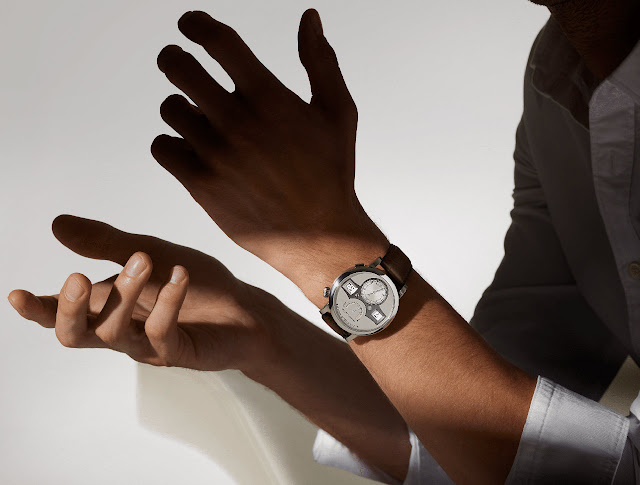 END_OF_DOCUMENT_TOKEN_TO_BE_REPLACED

Why is the Patek Philippe Nautilus so expensive now? There is no denying that Patek Philippe is one of the top watch companies in the world. And when you ask…

END_OF_DOCUMENT_TOKEN_TO_BE_REPLACED

Best Affirmative Staple x Fossil Nate Sundial Wristwatch Given that Fossil Group Inc.’s stock price sometimes exceeded $100 per share between 2011 and 2015. And that it is currently trading…

END_OF_DOCUMENT_TOKEN_TO_BE_REPLACED

Our Best Telegram Channels and Groups

Why is the Patek Philippe Nautilus so expensive now?

We use cookies to ensure that we give you the best experience on our website. If you continue to use this site we will assume that you are happy with it.Yes, I'm AcceptRead more